I strongly believe that you should nearly never trade or invest in foreign stocks.

Money managers point out that overseas stocks trade more cheaply, as you can get a bunch from here or because a stock is 10% off.

Foreign stocks are cheap for a reason.

I try to synthesize information from all sources, especially what corporate executives say about other companies' products. That to me is the gold standard. It lead me to pull the trigger on ZM.

Invest and Trade in the Good Ole USA

I often caution my readers that you should be very careful about investing and even trading in foreign stocks. Many money managers push their clients with the justification that foreign stocks are cheaper. That's like buying bananas at one store over another because the fruit is cheaper. I say they are cheaper for a reason. Also, tell me where else can you get a Microsoft (MSFT), or an Alphabet (NASDAQ:GOOG) (GOOGL), or an Amazon (AMZN). I know someone will comment that there's Alibaba (BABA), OK, well BABA is one of the only stocks that I would fast trade from China. I would not invest in it. You can disbelieve whether Carlos Ghosn is innocent, I do believe him. Even if you don't, the way he was treated and singled out for that treatment only because he wasn't Japanese illustrates why your investment in stocks there is quite dicey. Think long and hard about it. Yes, Western Europe will treat you better, so go ahead take the currency risk for less than zero growth and invest in the EU. Have a ball. I will stick with the best, most liquid, most transparent stock markets on the planet. That's just me.

How Ghosn Confirms Zoom Video (ZM) as a Buy

First, let me make the case for ZM singly. ZM is a recent IPO from last year (its IPO expiration was last October). ZM is growing at a furious rate, some 85% in revenue in its recent Q3 report. In addition, ZM already is profitable. ZM has become an essential enterprise cloud application for video conferencing and offering a platform for future additional functionality.

If you are nervous about all these fast-moving names flying ever higher in stock price, ZM actually is significantly below its all-time high. It's currently trading at around 72 and its all-time high was 107, about 30% lower. ZM has re-established its uptrend, and this already has caught my interest from how it has been behaving price wise. Let’s take a look at the chart here. 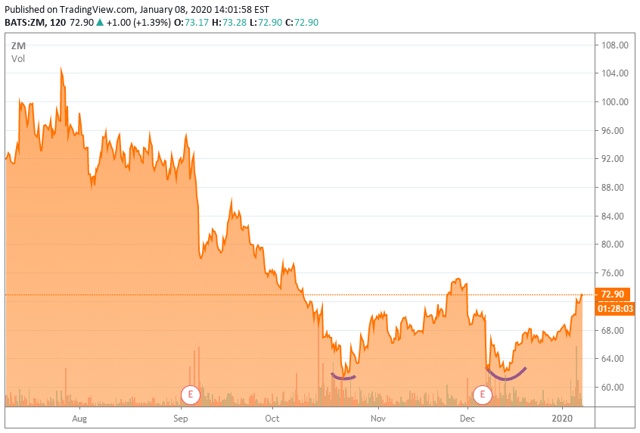 We see a very well defined double bottom. As I said I found the price action encouraging as well. Going forward though, there's a bit of upward resistance as it gets close to the upper mid 70s. The chatter among traders is that ZM is one of the more worthwhile IPOs in that its service has caught on like wildfire not only in the enterprise but also in the SMB world. In fact, it was stated that Zoom video was being used as a verb, as in “I will Zoom you” or “you can Zoom us at such and such times.” That kind of mindshare is extremely valuable to a brand. So, naturally, as I was observing the Ghosn presser and was marveling at his facility in French, Arabic, Portuguese, and English. Imagine my shock when Mr. Ghosn as he was enumerating all the inhumanities that were visited upon him, including not being able to visit with his wife, he said, “and they even wouldn’t let me have a ZOOM with her.” Here was an executive that has spent many months in solitary and away from the Internet, and other communication, but he used ZOOM as a matter-of-factly as saying “and they wouldn’t let me text with her.” I was gob smacked. I, therefore, think ZM will continue to rise and create alpha for traders. As far as an investment, it does not offer a dividend. Long-time readers will know that I don’t like to promote non-dividend paying stocks for long-term investment accounts.

I am not an investment advisor. I write about how I surface stock opportunities. I take a multi-disciplined approach. I'm attracted mostly to high-growth stocks, most especially when a great name has fallen from its all-time highs and is moving back to it. Just like ZM. That said, I believe ZM has a very strong future, I believe there's a growing enterprise trend of adopting “cloud-based social networking for the enterprise.” Other names on this list are Slack (WORK), Anaplan (PLAN) and Smartsheets (SMAR), among others. I'm equally supportive of WORK as a misunderstood enterprise cloud technology. So while I can’t recommend ZM as an investment, if you have room for such a name, you may decide to hold on for a longer period of time than a trade, in what I call a speculation. It’s a time-based designation, of six months to a year, or even more. I would stop holding onto it if another means of video communication gains currency.

I Went Long on ZM

I went long on ZM today. I have been criticized for owning a stock that I recommend and criticized for NOT owning a stock that I recommend. If you think that I'm egomaniacal enough to believe that my notes can move the market, then you can question my motives. You can draw your own conclusions about why I would write about this. I write because I want to share my process with you. That process includes drawing charts, which I do freehand, and that seems to have perturbed some individuals who have some kind of aesthetic problem with that.

A Short Note About My Last Piece Regarding Boeing (BA)

AI charted BA yesterday and it didn't trade as advertised. Here's the chart in question: 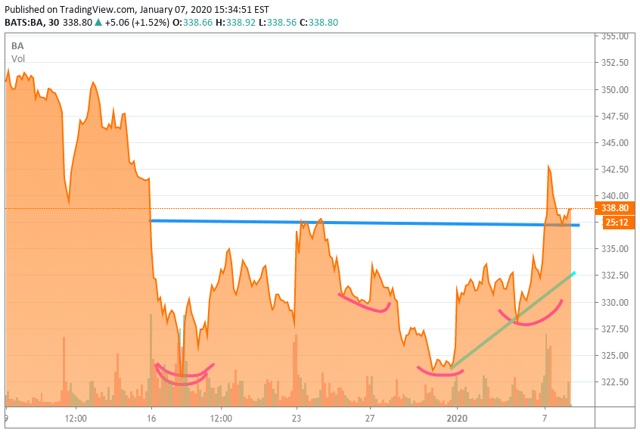 The horizontal blue line which I drew as a support level on this chart did not hold. I want to assure you that I do not wish to mislead my readers astray. When I recommend a stock and chart, the price movement. I'm not attempting to manipulate the price of BA, a major Dow index mega cap which trades millions of shares every day. Let me assure you, I'm not so delusional to believe that I have such sway over the stock or you, my loyal readers. I will tell you that I'm still long BA even in the face of this retreat from the levels in the chart. For the sake of argument, and I agree that obviously I was mistaken for surmising that BA would now occupy this higher level in its trading range of 338 and up. In my defense, that only after I wrote this piece in the afternoon, that just that evening a Boeing 737-800 crashed at 11:45 pm last night. The 737-800 is part of the old 737 series, which is one of the safest commercial planes in history. The fact that BA is down about 1%, even though it broke the support level I drew, is astounding. Why isn’t BA down 100 points? It must be my magical hold over the stock that won’t let it fall. Or, maybe, just maybe, BA is the best mega-cap industrial alpha opportunity out there. Perhaps institutional money managers will not let go of this name. They want to wait out the current turbulence in the name in order to reap future rewards.

If my charts are too messy for you, skip them and read on. They help me make trading decisions, and I hope that they help some of you. If that doesn't work for you there are plenty other writers on Seeking Alpha.

My Trades today: As my BA calls fell, I added more funds and moved it “up and out.” This means that I raised the strike price a bit, and I moved the expiration to March. I expect the situation to be largely resolved by then. I also got long ZM with a long CALL. I rolled up HUBS again to a higher strike price to harvest some gains. I'm still long SPLK. It's breaking out and I think there's more alpha to be had. Though I admit that I don’t like riding a position into a break-out so I don’t feel comfortable telling others to get in now. However, many technical traders wait for breakouts to begin a position.

Disclosure: I am/we are long ZM. I wrote this article myself, and it expresses my own opinions. I am not receiving compensation for it (other than from Seeking Alpha). I have no business relationship with any company whose stock is mentioned in this article.

Additional disclosure: I am still long BA, SPLK,HUBS and CRWD. All my trading positions in the form of Call options 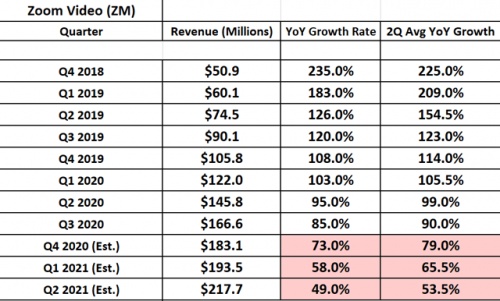 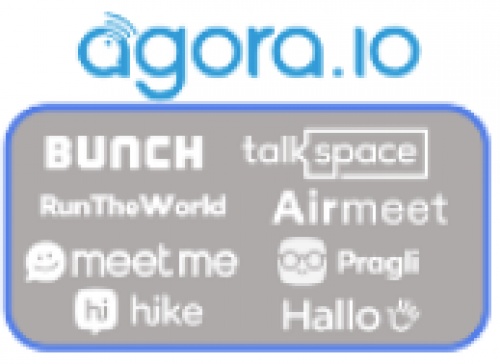 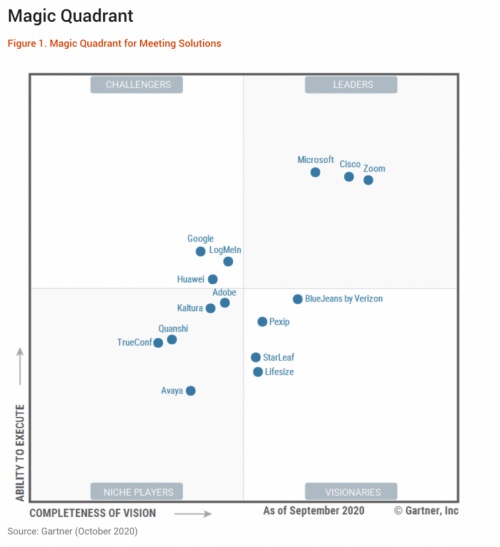 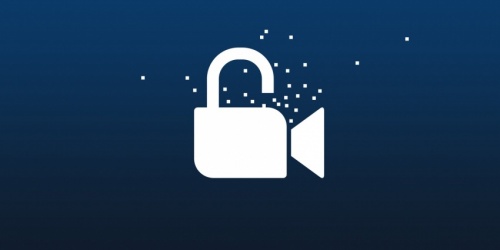 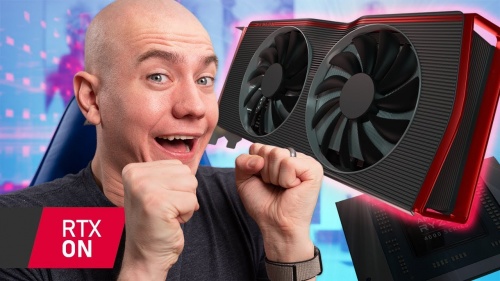 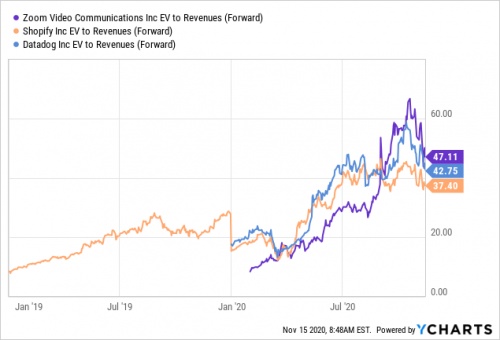