Feb 5 2020 - Caution: Don't Let Euphoria And FOMO Rule You, You Can Still Trade For Now

I was going to sound the alarm that we are heading back into a euphoric stage. Then I dug deeper.

We are in fact seeing a rally that's rotating sectors, and that's a good sign.

Many of the names that have gone parabolic are now receding a bit, yet the market is not following down. This is all good.

I think there are still leadership names that can be bought right now. Also there should be an opportunity to buy the dips in the prior leadership.

Examine your motives for getting into a momentum names. Is it FOMO, or the "one that got away?" Are you angry that you missed a trade? Let it go.

Euphoria? Not so fast..

I started writing this note warning you that we are heading to a euphoric stage, but right now the market is behaving the way I would want it to. Look at all the tech names that were up strong the last few days that are back down fairly hard right now. The first is Tesla (TSLA) which I write in depth about below, but there are a bunch down hard today on no news other than we’ve gotten a bit ahead of ourselves…

There are plenty of names that were up crazy that are now down strong and potentially taking a rest. That means to me that this rally is healthy, we are rotating around in different sectors. Away from software/cloud services and maybe move to healthcare, financials, consumer, and/or chips. I'm operating on the notion that as long as we have stocks going down hard while other parts are rallying then this rally can continue. Now back to my original writing... 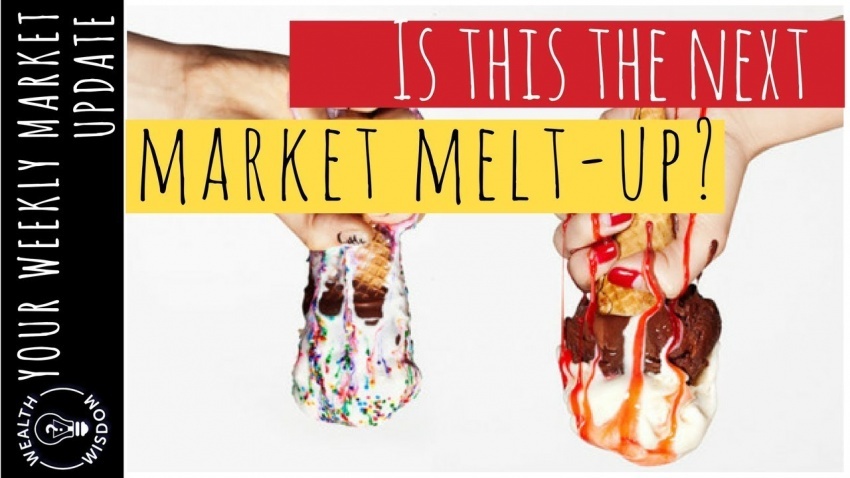 Euphoria can be built on fact but still get nutty, look at Tesla

Tesla has gotten to parabolic levels. The shocking news is that money managers are buying at these levels, not just naive retail buyers. There are a lot of real reasons why Tesla is the future, you’ve all heard it already, how TSLA is not a car company, it’s a tech stock. Yes, and yes, I am a believer, but has the bull case really changed substantially from three weeks ago? TSLA is now trading substantially lower than the mid-day high of 960ish. I won’t be so arrogant at this point and say those traders that got in at that level won’t be able to create alpha for several months. Perhaps it will take days, or weeks, or hours, who knows. It's not a stock for me at this point. Yes, I kick myself for not just starting with Tesla first when I was going long CALLs into the Friday close, but you can’t let that occupy your brain stem. I lost out, but the past is past. Let’s that negativity slide, the more you think about past “mistakes” the more future mistakes you will make. As a trader, just like any high-performance activity, half the trick is to manage your mental conditioning. So, would I touch TSLA right now? Nope, I don’t have FOMO, if you want to try and trade this market avoid the Fear of Missing Out. That means the stocks that have really run up, like TSLA, should be avoided. What names are like TSLA? Trick question, there are no stocks like TSLA.

What could shake this market? How about the Wuhan Fever Epidemic?

The market is looking away from China at this point. In fact, I totally called that last week. Even more so, on Monday I pressed the notion that we would see some good gains this week. Yes, and this rally can continue even another week. Just remember to be wary about going back into the parabolic mode. Trade into that and you will be vulnerable to any news that takes away from the notion of perfection.

So it’s not just about China, it can be anything. For traders, this rally is the best of all possible worlds. You have a very real negative back story in how the world economy will be affected by Wuhan Fever epidemic. The countervailing news is the fact that the US economy is humming along. We see evidence this morning in the latest employment report from ADP which showed a high employment number - 291K vs. 150K basically double the expected. We had great manufacturing PMI numbers yesterday and the Atlanta Fed predicting a 2.4% GDP for Q1 2020. All good.

Also, a euphoric phase is rare, I was calling it a melt-up. The last part of a melt-up is often referred to as a “blow-off” top. We don’t want to be trading long once that happens. There will be a lot of pain to be dealt with if that happens. What's the example of a blow-off top? We have the nifty example of TSLA shooting to 960 yesterday, and then reversing very hard. Again, those traders, or money managers, or neophyte retail investors may decide to sit it out, and TSLA jumps right back. It could happen. Or it doesn’t happen. I’ll let you in on a little secret, I would not want to be the trader that top ticked TSLA yesterday. That could happen to the entire stock market, and that would be a world of hurt. You don’t want to be top ticked on your entire trading portfolio.

What to watch for: V I X

Keep focused on that VIX. It has come down mightily since Friday. Keep your eyes peeled for the 13 “handle”. I wouldn’t say that it's the signal to sell everything. Maybe ease off on the risk, don’t go for the most aggressive trades, and manage the positions you already have. Once it gets to 13 flat, start trimming existing positions. When it breaks 13 starts getting flat on your trading account. This is not about investments or longer-term trades. If you have trades that you are intending to buy and sell within a few days or a week I'm talking to you.

I introduced this acronym back in December. I believe these names ended up being very defensible choices even in February right now. MSFT is resting right now. I would buy any further retreat right here. AAPL has proven itself by bouncing from that 302 level. I would again, buy that level if you get to see it again. DIS just reported and by all reports it was a great result with the Disney+ package still growing by leaps. It's a bit weak right now, but if it falls a little more, it might be a worthwhile trade. GOOGL looks like it's being hit hard but much of the retreat was from it running up into earnings the few days beforehand. I think that if you wait a few days, it to could find a better level from hence. I think breaking out YouTube and Google Cloud is showing that CEO Sundar Pichai is going to rely on them to bolster growth in the company going forward. The core ad business might be slowing a bit, but it's huge already and maybe Facebook (FB), and even Amazon (AMZN) are taking share. Google Cloud is growing at 53% and they now have a fantastic CEO in Thomas Kurien who's not afraid of growing the business by acquisition. In fact, in a future article, I will explore possible acquisition candidates for GCP. They could easily grow both. YouTube already is bigger than Netflix (NFLX), they need a good media person to grow paid subscriptions. I already spilled plenty of ink on AMZN, in fact it's my trade this week, along with the next and last name in this acronym - GE. I think GE’s breakout is still intact, and once the craziness with TSLA dies down a bit, traders will look for names that are breaking out, like GE and AMZN. I have seen upgrades as high as 16, though I called for 14 for 2020. A trade from about 12.5 to 14 is a very nice pop, and I think it's doable in the next three to five weeks is 11%. Not too shabby. Of course, if something happens to create another downdraft of 3% to 5% we may need to reset that timeline. Of course, being stuck in GE is not too terrible a place at this price level. So what do I think right this minute for these names as a trader? In summary:

AAPL I think it is can fall back towards 300, you might buy that dip

AMZN I see it as a buy. It's in a bonafide breakout, same with GE.

One final thing about MSFT, it got a bit ahead of itself but it was in break out mode as well. Traders will jump on it if and when it breaks to new highs again.

I love all the names I listed at the beginning of this item. At some point, market participants are going to turn back to these names. It's up to you to decide when to get back in, but this volatility is a gift - ROKU, AYX, TTD, TEAM, HUBS, OKTA, COUP there are others, of course. I would wait a day or two. In fact, I will revisit this sector in the next piece and see if we have entry points. Maybe we will even take another look at TSLA - maybe not.

My Trades: I'm long CALLs in AMZN I am looking to extend the expiration further out from early March. I'm also long GE CALLs. I'm looking to get back into BA CALLs in the next sell-off.

Disclosure: I am/we are long AMZN. I wrote this article myself, and it expresses my own opinions. I am not receiving compensation for it (other than from Seeking Alpha). I have no business relationship with any company whose stock is mentioned in this article.

Additional disclosure: I am long in the form of CALL options in AMZN and GE 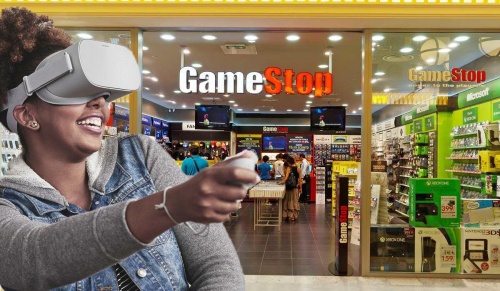 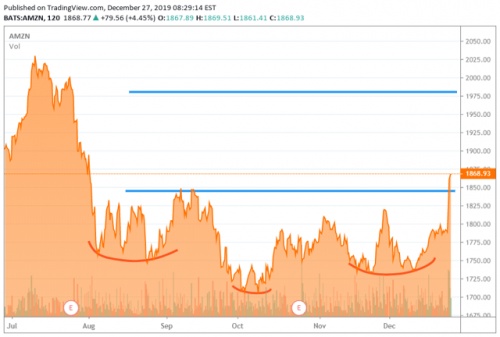 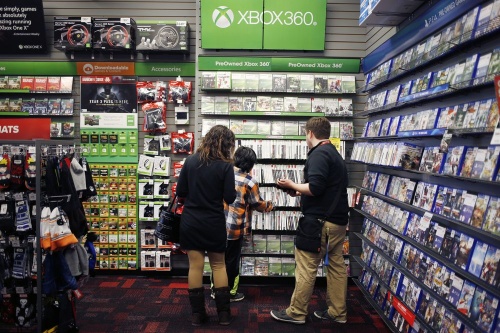 June 18 2020 - There's Limited Downside Because The Pros Have FoMo 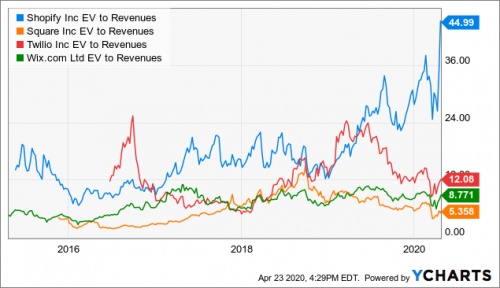 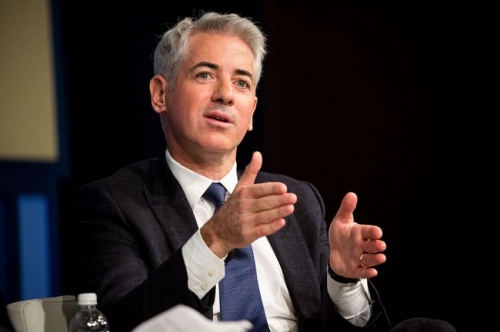 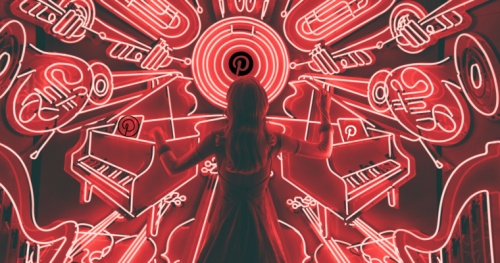 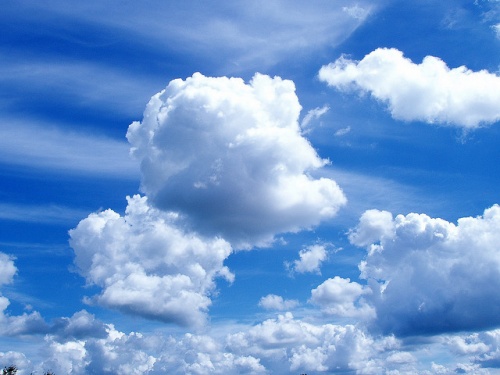