I have an operating theory and I am going to stick with it until new information changes it: We are in a corrective phase.

I need to practice what I preach and look for the dips right now.

I think the pattern of the indexes rising at the beginning of this week and selling at the end is holding -- for now.

I make the case that Shopify will graduate to the FANG universe by the end of this year and into 2021. It is all about the leadership vision.

A look at this week to get a handle on next, Also by 2021 Shopify will Join FANG, here’s why

In that piece, I asked you to look for stocks that have dipped, instead of going long stocks near their highs. It is clear that this assertion is now confirmed. Let’s still take a look at where we are at on the chart and then draw a conclusion on where we might be headed next week. So let’s look at a one month chart of the SPY which is the S&P500 ETF. 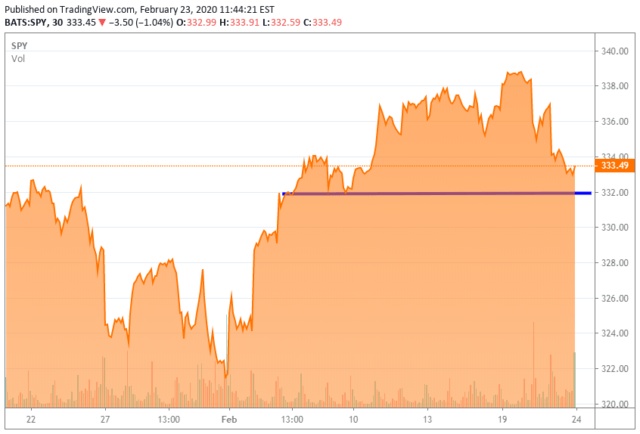 I am operating on the theory that the indexes are in a corrective phase that is going to be correcting over time going just above and then a percentage point or two below the high. If that is true then the S&P 500 has support at about 10 points below the close, and not by falling precipitously. Of course, if the news on the CoronaVirus is worse in China, and really picking up in Korea, and Japan then we don’t hold support. I think we do..

So I think we will open down on Monday and then bounce, probably giving us 2 to 3 days of upward movement. I obviously missed my projection that this turn will happen on Friday, in my most recent note to you. In my defense, I didn’t fully recognize that the news out of Korea was that whip of the CoronaVirus tail that could pressure the indexes one last time. This was my assertion the Friday before last. The fact that we had two strong days of selling, I believe sets us up for a counter-trend at the beginning of this week. That doesn’t mean that we won’t sell at the end of next week. This has been a trend now for about a month. Patterns tend to propagate until everyone expects them. So traders, please don’t overcommit. Look to the bottom of this piece for My trading strategy for Monday. Let’s press on with the review.

I want to address the part where I said that I let go of Amazon (AMZN), my reason was the conclusion that AMZN was no longer breaking to new highs for now. Even though I already wrote about not buying the rips I was guilty of doing the very same thing. In my defense, I was in a call spread which automatically shields to the downside. I did say that if you were still in a breakout type stock and in calls that you should spread that position. I got out of AMZN early Thursday morning when I was observing the price movement, looked at the chart and got the news that AMZN is now a “favorite” of the hedge funds. The “favorite” status is not always a good thing and my point was borne out on Friday. In this case, I believe, that a form of “signaling” occurred. A hedge fund, probably a big one, sold AMZN short at just below its previous closing high and that was signal for others to go short. Let me use the example of “economic signaling”: an airline company, let’s use Panam decides to float a price increase for a competitive route like NYC to Chicago. They publish a price hike of , if US Air (another defunct airline) raises, then EVERYONE raises. If no one bites, Panam is free to lower back the price and no one is the wiser. I won’t go into the legality of this maneuver, let’s just be grownups and know that it is what it is. The fact that we eliminated the uptick rule on shorting makes this type of tactic totally feasible in trading. Also, let’s agree that a “double-top” is equivalent to “Snake-Eyes” for traders. Everyone can look at a chart and ah ha! A double top, let’s short this sucker.

I'm looking to get back in on AMZN

Now, does that disqualify AMZN from being the number one trading vehicle in my universe? Absolutely Not! In fact, I am pretty sure that the hedgies are going to have one last go to the short side at AMZN on Monday. Then they are gonna go long on this name like their P&L depends on it, because it probably does. So AMZN bottoms Monday morning and then it’s going to break above that previous high going into 2200+. I will look to get back in off of this dip, which is practicing what I preach.

Shopify Gunning For Square and Paypal, and a place on FANG

Shopify (SHOP) is making moves that belie much greater appetite for growth in SHOP that the market is not pricing in. Take the latest news below according to Reuters:

Canadian e-commerce company Shopify Inc stated on Friday that it would join Libra Association, a group that manages Facebook Inc led efforts to launch a global digital currency, Libra. "We will work collectively to build a payment network that makes money easier to access and supports merchants and consumers everywhere," Shopify said in a statement Shopify joins Libra Association. Meanwhile, companies including Vodafone Group PLC , Paypal Holdings Inc (PYPL) and Mastercard Inc (MA) have exited the association in recent months. Facebook announced in June last year its plan to launch Libra in partnership with other members of the association, but the project soon ran into trouble with US politicians and skeptical regulators around the world.

My Take: This item and prior news that Shopify is focusing on providing point of purchase technology to “brick and mortar” stores, tells me that SHOP is gunning for, Square (SQ), and with this piece of data that it is going after Paypal (PYPL) as well. That isn’t to say that I am backing away for my support for SQ and PYPL. There is room for each of these players, however, I am struck by the boldness of the vision and reach of CEO of SHOP Tobias Lutke. It was only a few months ago that he made a move into logistics and warehousing to go after 3rd party fulfillment business of Amazon (AMZN). Now with a succession of these announcements the outlines of his vision are being confirmed. I think it won’t be long that SHOP will be mentioned in the same breath as Alphabet (GOOGL) and AMZN, and perhaps becomes part of FANG by the end of this year, albeit as a name on the come. SHOP may double by the end of this year if it does execute on its ambitions. SHOP’s move to Libra is not only a shot across the bow to PYPL but it also comes at the right time to “save” Facebook’s (FB) Libra project. FB seemingly backed away communications-wise and also started to work on other payment schemes for WhatsApp and messenger. Along comes SHOP to swoop in and take the initiative.

My trades: As I said, I think SHOP becomes synonymous with other leaders in the cloud. That means that it will get the type of focus and sponsorship that the other FANG names get. That also means that SHOP could get a lot of retail investors interested in this name. I, therefore, sold my AMZN CALLs and started a position in SHOP. Again, that doesn’t mean that I am abandoning AMZN as a trading vehicle. You can trade both. I want the 100+ points that I think the hedgies are going to create on the bounce from the 2060-2080 level. I am going to wait until I see AMZN in the black, so that means I am not going to try and buy the low. I want to wait for the “signal”, meaning that the hedge fund guys have taken it as low as it will go and the momentum is now the up.

I didn’t spread SHOP right away, thinking that we would bounce on Friday. Again, I should practice what I preach. I write to enforce my own trading discipline so, so far this trade is underwater and I didn’t have to. Please don’t make the same mistake, SPREAD your calls, especially now. You can always roll-up. Yes, it does limit your upside, but if you do it right, in volatile times like today you can create more alpha not less. To make a long story short, I intend to go long on both names and spread them.

I am also long Slack (WORK), I think it will keep breaking out. In this case, WORK is way below its all-time high. Trade to spread it at the close on Friday but didn’t get the price I wanted. In this case, since it was trading in the green all Friday on the news that UBER has gone all-in on Slack software. I think the worm has turned for WORK and it is going to new highs.

Finally, please continue to keep an eye on the VIX. We need it to slowly recede. If it doesn’t it means we have more 1% swings on the indexes on a day to day basis.

Disclosure: I am/we are long SHOP. I wrote this article myself, and it expresses my own opinions. I am not receiving compensation for it (other than from Seeking Alpha). I have no business relationship with any company whose stock is mentioned in this article.

Additional disclosure: I sold AMZN but I will look to get long once the bounce is confirmed. Also I am long WORK. All my trades are expressed in Options. I will spread all positions going forward. 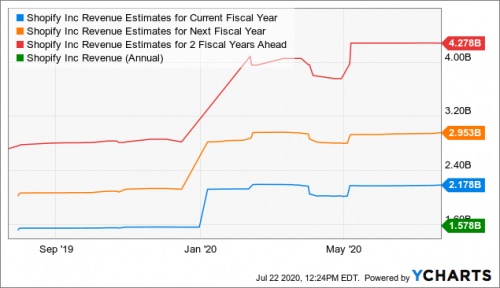 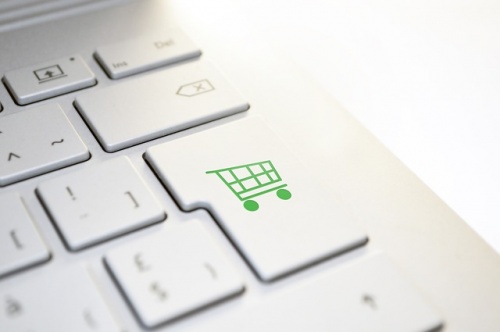 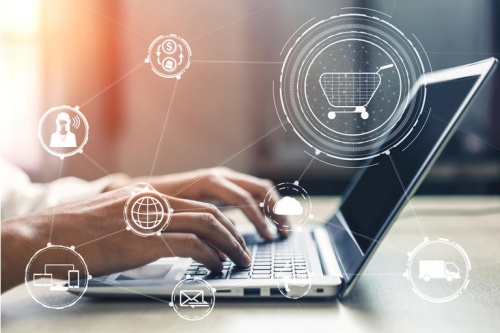 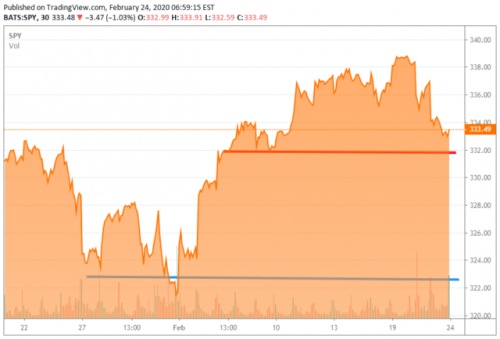